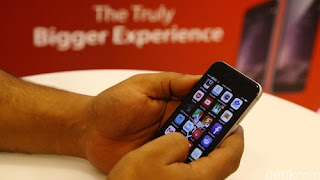 Update iOS 9.2.1 has just been released Apple was not just provide bug fixes and improved security side. Circulated information that the update also makes old iPhone so much applause performance.

Some time ago rumors about the alleged demand by the user to Apple. Fill demand is suing Apple because the iPhone 4S hers, so their performance dropped significantly after the update to IOS 9.

According to him, because the iPhone 4S still officially supported by Apple's brand-new iOS, the experience gained should remain the same as the previous version. But what is expected does not match the reality, that's what the reasons are unknown so named Chaim Lerman is suing Apple.

So far there is no further news about the claims in question. However it looks like Apple is not standing still as a user finds that the latest update iOS 9.2.1 is able to make the old iPhone, which in this case is the iPhone 4S, faster performance than using the previous update.

Indeed, when the initial boot, the iPhone 4S iOS 9.2.1 tend to wear longer. However, users will experience a more smoothly after the entry into application screen. Open the application and its use also feels more comfortable.

But of course his experience can not be compared with the newer generation of iPhone. But at least improvisation in iOS 9.2.1 is still able to give an opportunity for the older iPhone users to experience the latest version of iOS. In addition, it could also improvised in iOS 9.2.1 is Apple who did not want to move more older sued by iPhone users.