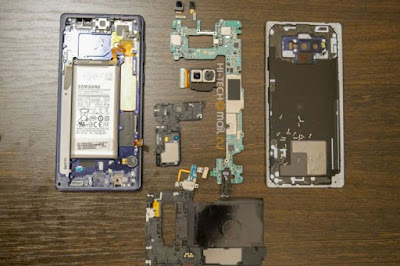 Galaxy Note 9 has just been officially announced on August 9 yesterday, but a site in Russia ( hi-tech. mail.ru ) has got a sample and immediately dismantled it to see the contents of the new device's stomach from Samsung.

The physical size of the Galaxy Note 9 becomes larger and takes up space in the internal space. Samsung overcomes this by shrinking the size of the mainboard board. 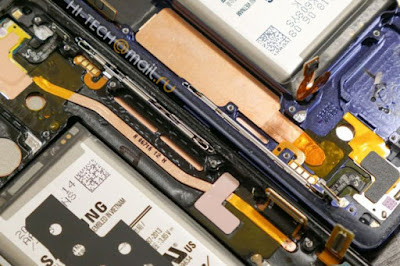 Then, the housing for the pen stylus S Pen on the stomach of the Galaxy Note 9 is now more robust and is called not prone to damage. USB type-C port can now be replaced without having to remove the entire mainboard , then the speaker is larger.

The larger surface area of ​​copper plates should increase the heat reduction capability generated by the runway (SoC) in the Galaxy Note 9, thus leading to minimized throttling (decreased speed of SoC to reduce temperature).

In addition to changes in viscera, the Galaxy Note 9 carries a number of new features such as the S Pen which can now be used as a "remote control" via a Bluetooth connection and a dual-aperture camera.